This online shop is using cookies to give you the best shopping experience. Thereby for example the session information or language setting are stored on your computer. Without cookies the range of the online shop's functionality is limited. If you don't agree, please click here.
to overview
Previous product
Product 7 of 652
Next product
1/6 "Pete 'Snapper' Winner" - British SAS Trooper, B Squadron Special Air Service (SAS), Falklands War 1982
- The figure is personally signed by Mr. Pete Winner -
Excerpt from "Soldier 'I': The Story of an SAS Hero"
The Falklands! Two small islands to the north-east of Tierra del Fuega, two specks floating in the sea, like tiny scales dislodged from the great curl of the scorpion's tail that is South America. With a coastline as long as Norway's circumscribing a land mass no bigger than Wales, the Falklands are subject to relentless winds and the hazards of wind-chill factor that accompany them.
As my eyes adjusted to night vision, taking the inkiness out of the purple-black surroundings, my thoughts turned to the achievements of British forces over the last few weeks. In very little time, a task force of over a hundred ships had sailed 8,000 miles and landed between 9,000 and 10,000 men on an enemy-occupied coastline, and the men had fought to within an ace of total victory.
The Sir Lancelot had been hit by Skyhawks and abandoned with two unexploded bombs aboard. A naval bomb-disposal team had removed the bombs and it now made an excellent base for an SAS QRF (quick-reaction force). Covert teams could now move at a minute's notice to locations on East or West Falkland.
The cocking handle of my XM203 snapped forward, chambering the first 5.56mm round. I applied the safety-catch. My fingers checked the smooth metallic cases of the 40mm bombs located in the pockets and the bandoliers criss-crossing my chest. Cradling the loaded rifle in the crook of my left arm, I stood motionless in the growing darkness.
We undertook several clandestine, precisely targeted operations. Like acupuncture needles stimulating the flow of energy through the body, our activities quickened the pulse of war and hastened the drive for victory. Tumbledown fell. Two Sisters fell. The Gurkhas took control of Mount William. It was during one of our secret sorties that the radio burst into life: 'The white flag is flying over Port Stanley.' Endgame! 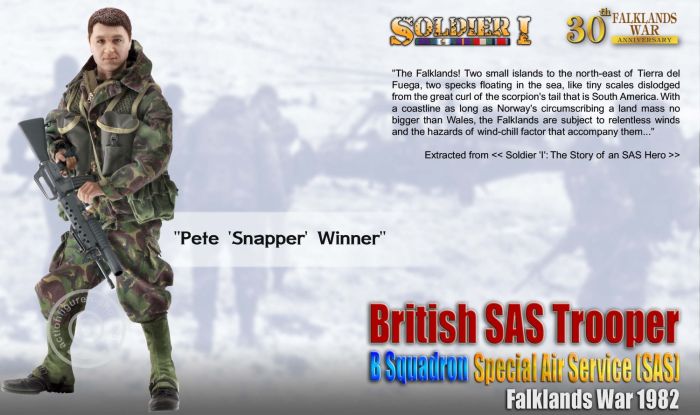