Frederick Barbarossa (1122 – 10 June 1190), also known as Frederick I (German: Friedrich I, Italian: Federico I), was the Holy Roman Emperor from 1155 until his death 35 years later. He was elected King of Germany at Frankfurt on 4 March 1152 and crowned in Aachen on 9 March 1152. He was crowned King of Italy on 24 April 1155 in Pavia and emperor by Pope Adrian IV on 18 June 1155 in Rome. Two years later, the term sacrum ("holy") first appeared in a document in connection with his empire. He was later formally crowned King of Burgundy, at Arles on 30 June 1178. He was named Barbarossa by the northern Italian cities which he attempted to rule: Barbarossa means "red beard" in Italian; in German, he was known as Kaiser Rotbart, which means "Emperor Redbeard" in English. The prevalence of the Italian nickname, even in later German usage, reflects the centrality of the Italian campaigns to his career.

Before his imperial election, Frederick was by inheritance Duke of Swabia (1147–1152, as Frederick III). He was the son of Duke Frederick II of the Hohenstaufen dynasty and Judith, daughter of Henry IX, Duke of Bavaria, from the rival House of Welf. Frederick, therefore, descended from the two leading families in Germany, making him an acceptable choice for the Empire's prince-electors.

Historians consider him among the Holy Roman Empire's greatest medieval emperors. He combined qualities that made him appear almost superhuman to his contemporaries: his longevity, his ambition, his extraordinary skills at organization, his battlefield acumen and his political perspicacity. His contributions to Central European society and culture include the reestablishment of the Corpus Juris Civilis, or the Roman rule of law, which counterbalanced the papal power that dominated the German states since the conclusion of the Investiture Controversy.

Due to his popularity and notoriety, in the nineteenth and early twentieth centuries, he was instrumentalized as a political symbol by many movements and regimes: the Risorgimento, the Wilhelmine government in Germany (especially under Emperor Wilhelm I) and the National Socialist movement, resulting in both golden and dark legends. Modern researchers, while exploring the legacy of Frederick, attempt to uncover the legends and reconstruct the true historical figure—these efforts result in new perspectives on both the emperor as a person and social developments associated with him.

Frederick died in 1190 in Asia Minor while leading an army in the Third Crusade.(C) Wikipedia

- One (1) head sculpt with fabric beard

- One (1) pair of copper wrist armors

- One (1) pair of copper lion cuisses

- One (1) pair of chain-armored shoes

- One (1) curved copper round shield

NOTE: Throne and Horse are NOT included 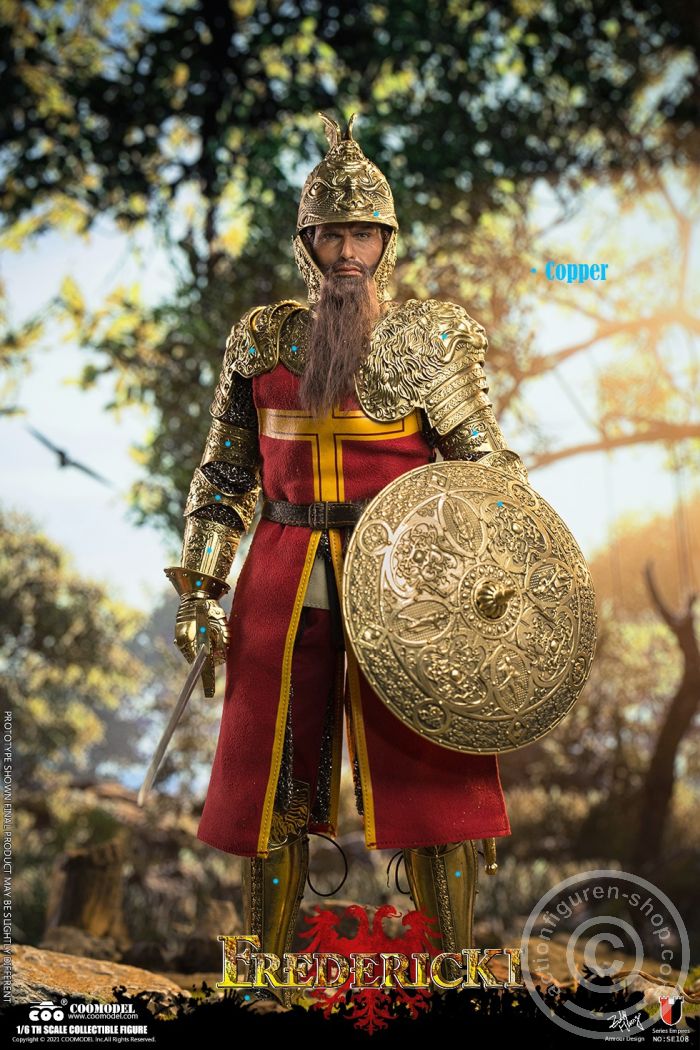 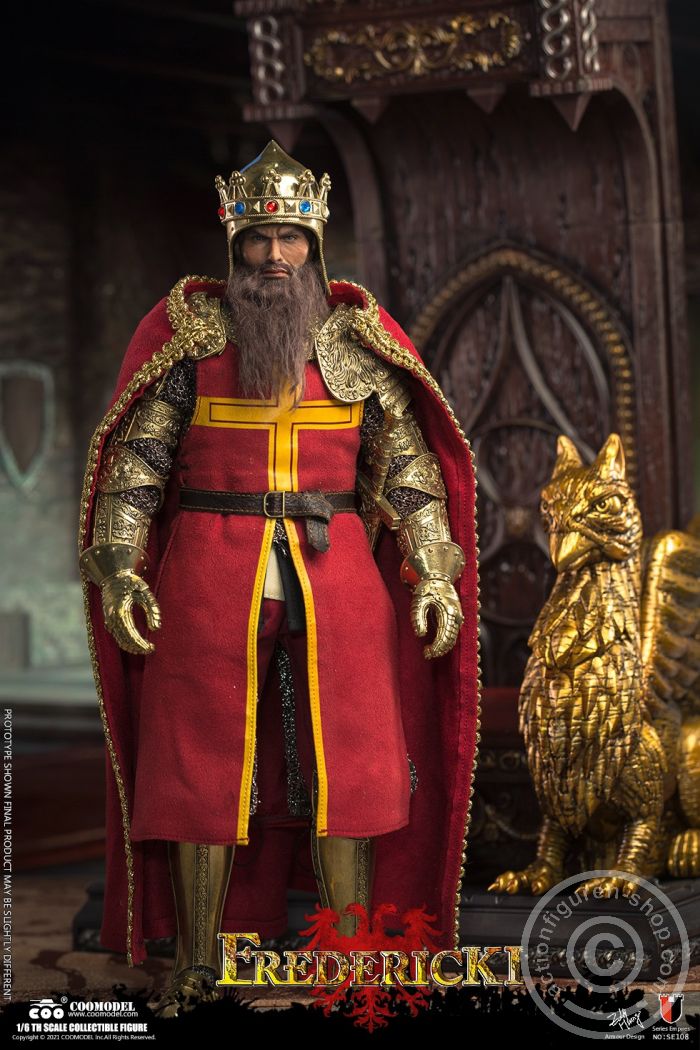 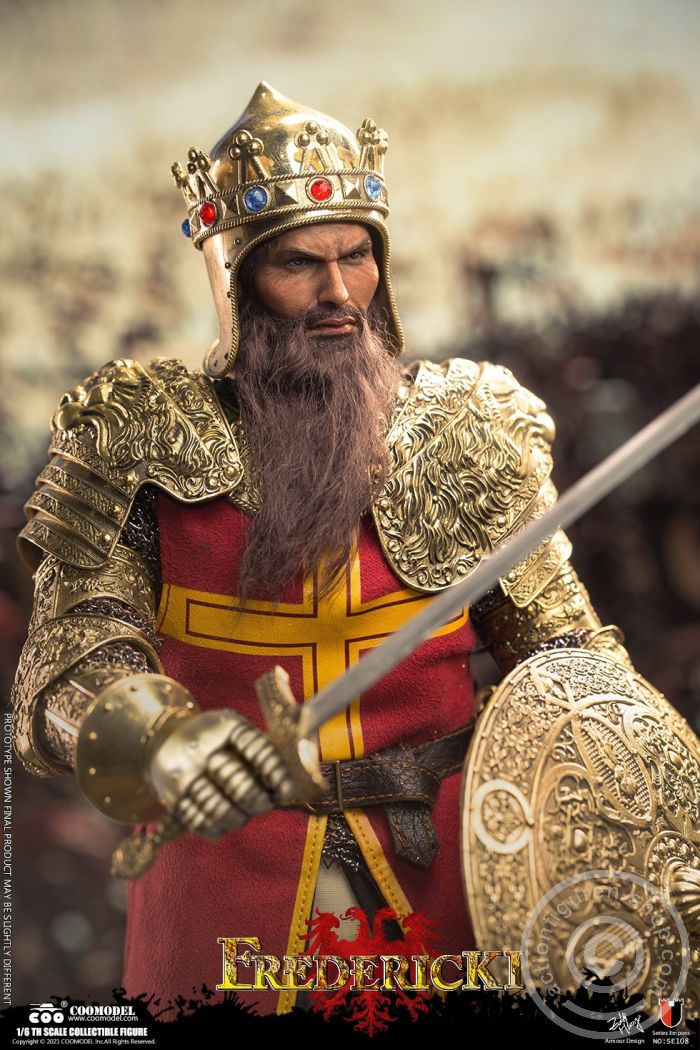 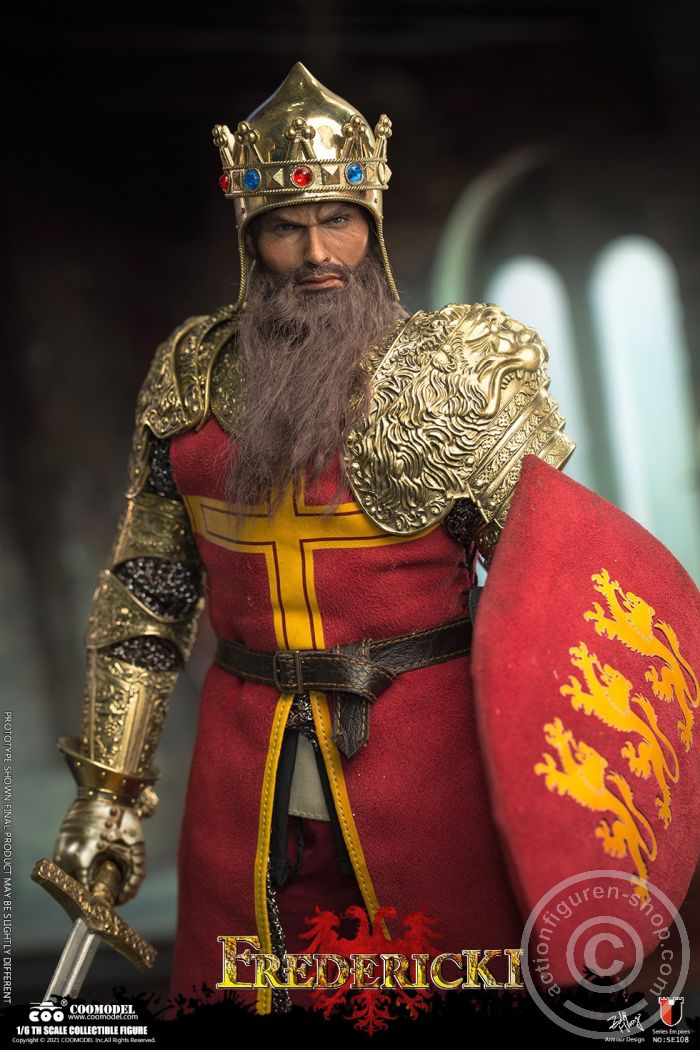 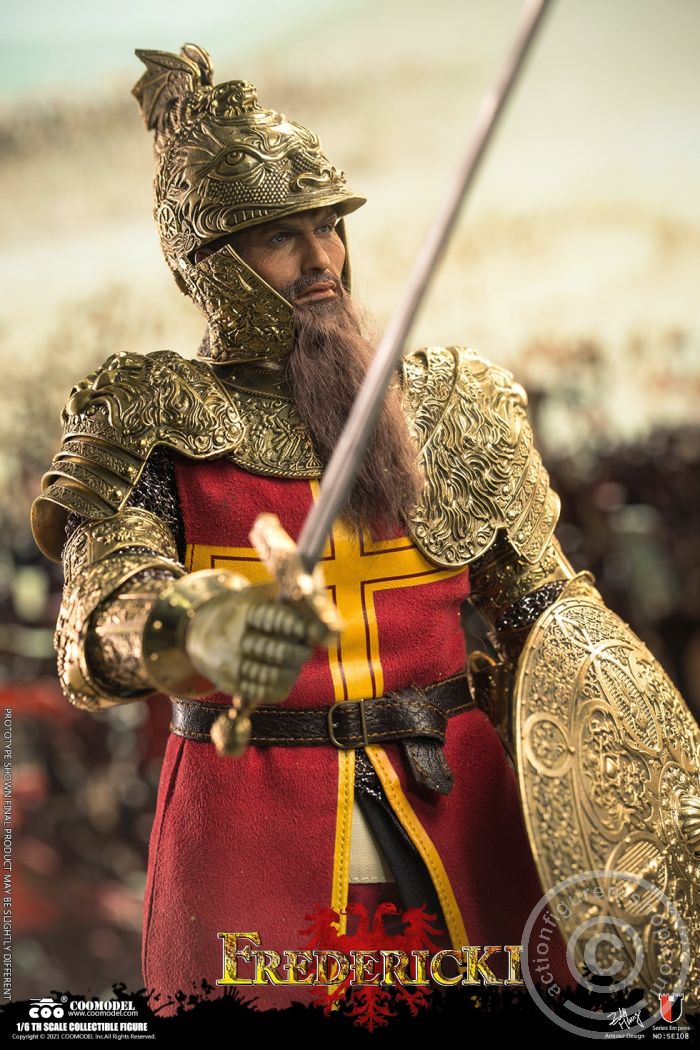 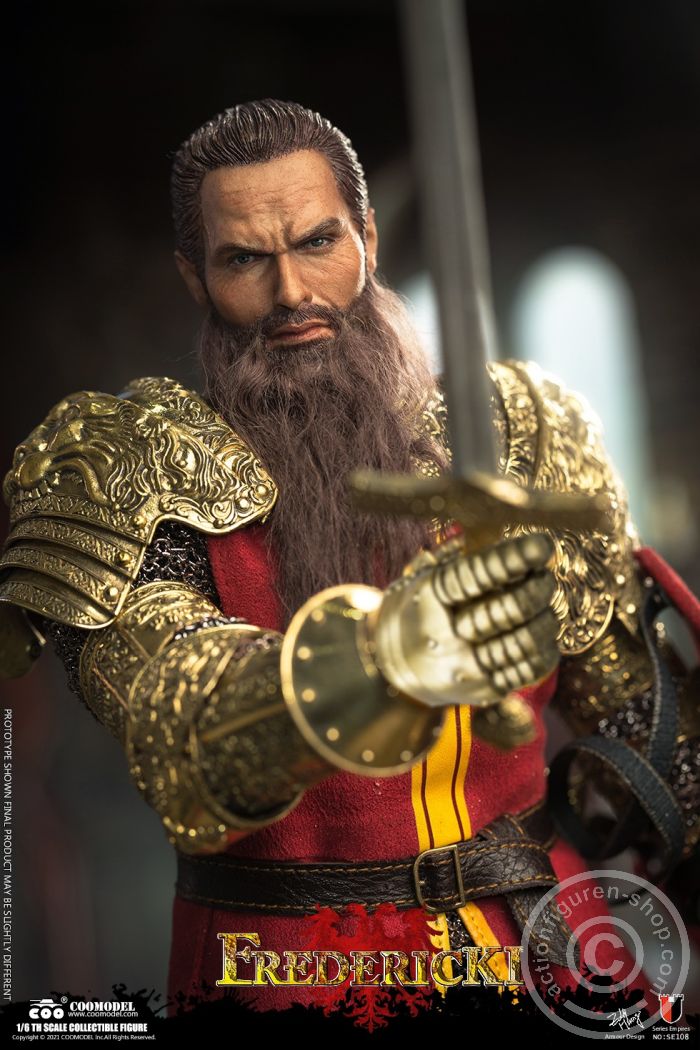 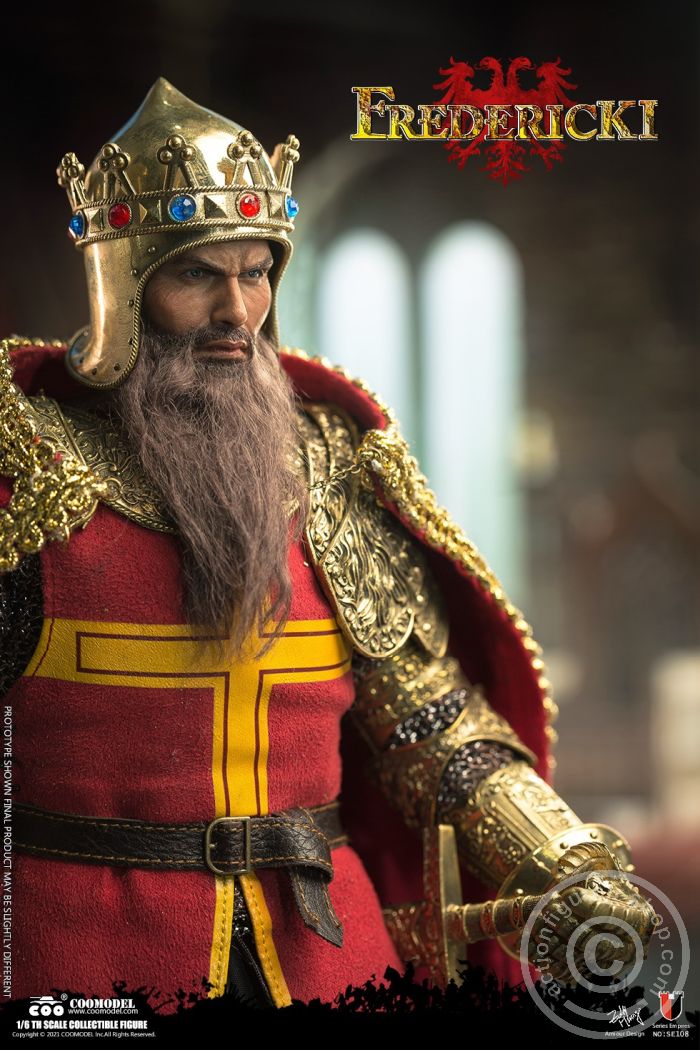 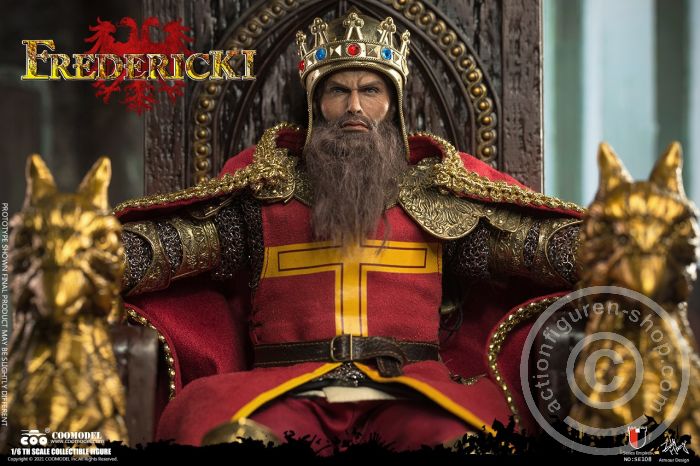 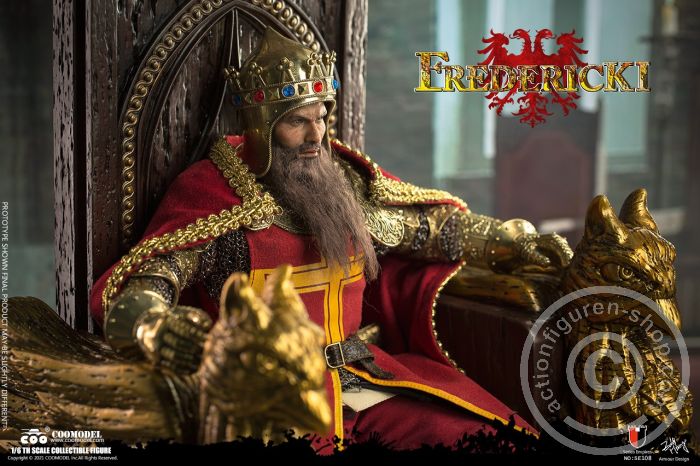 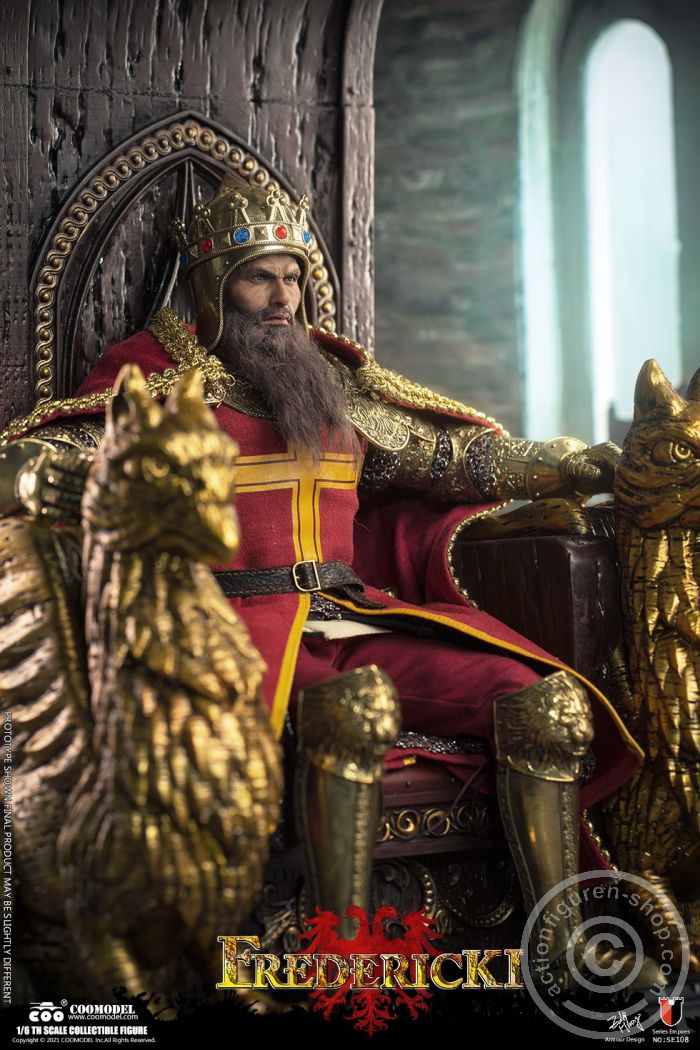 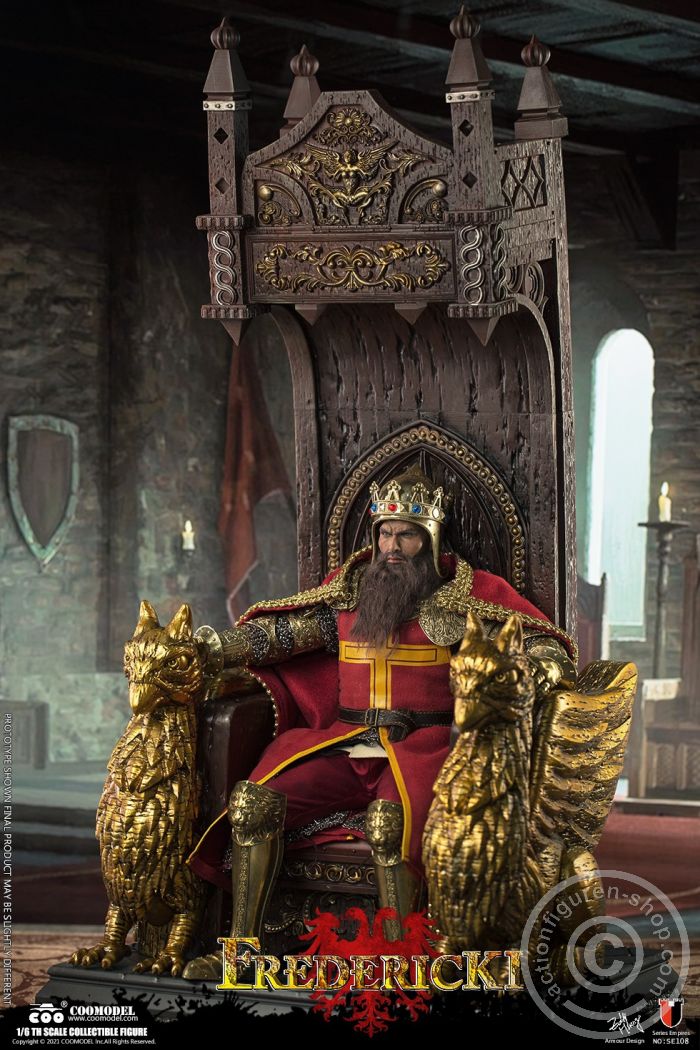 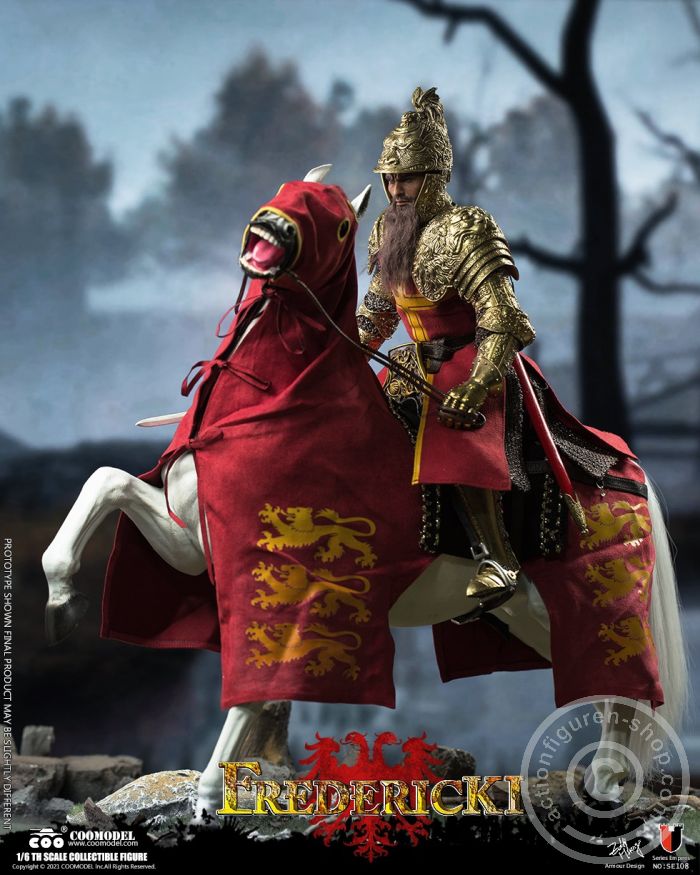 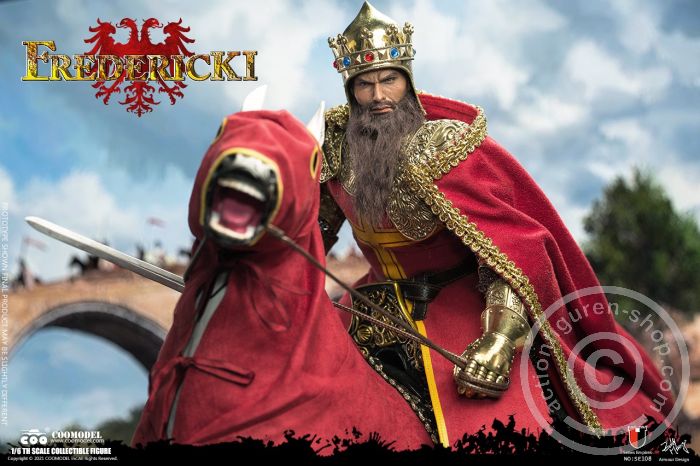 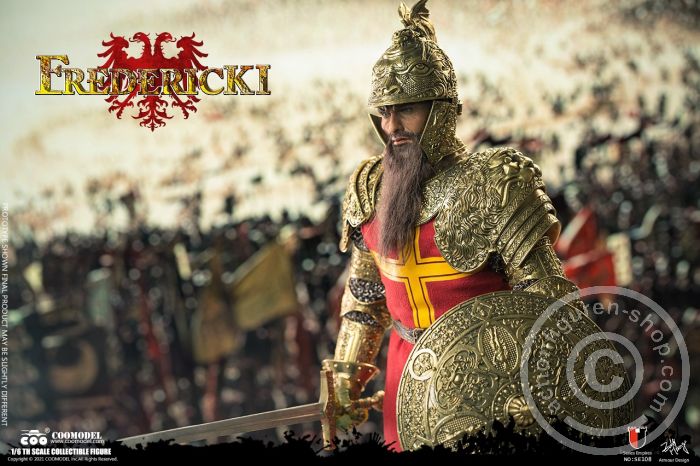 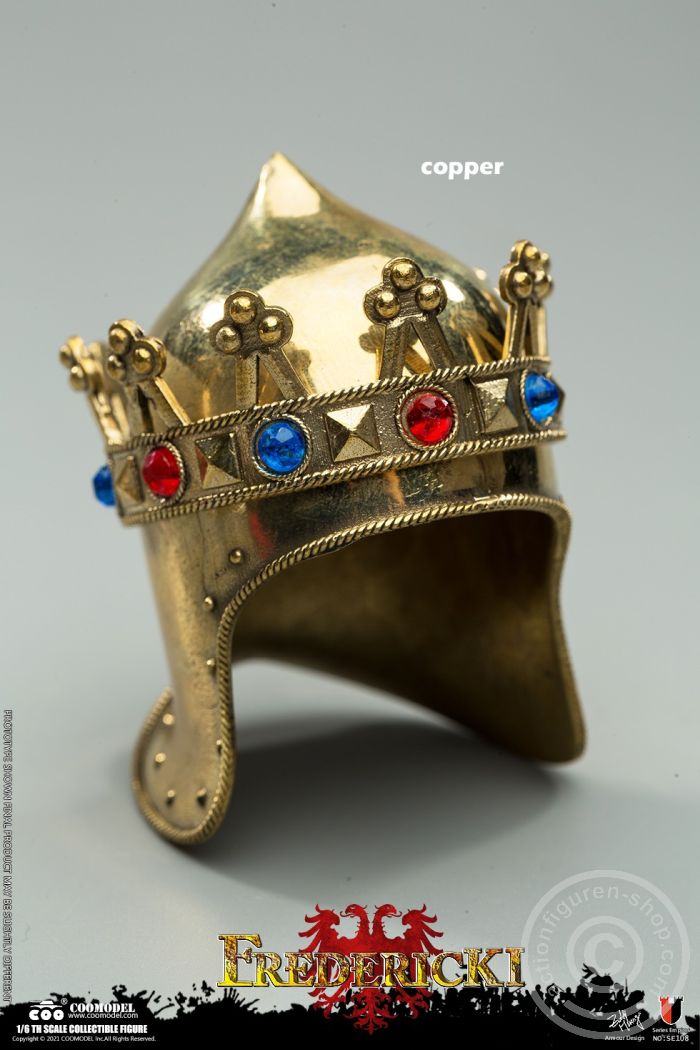 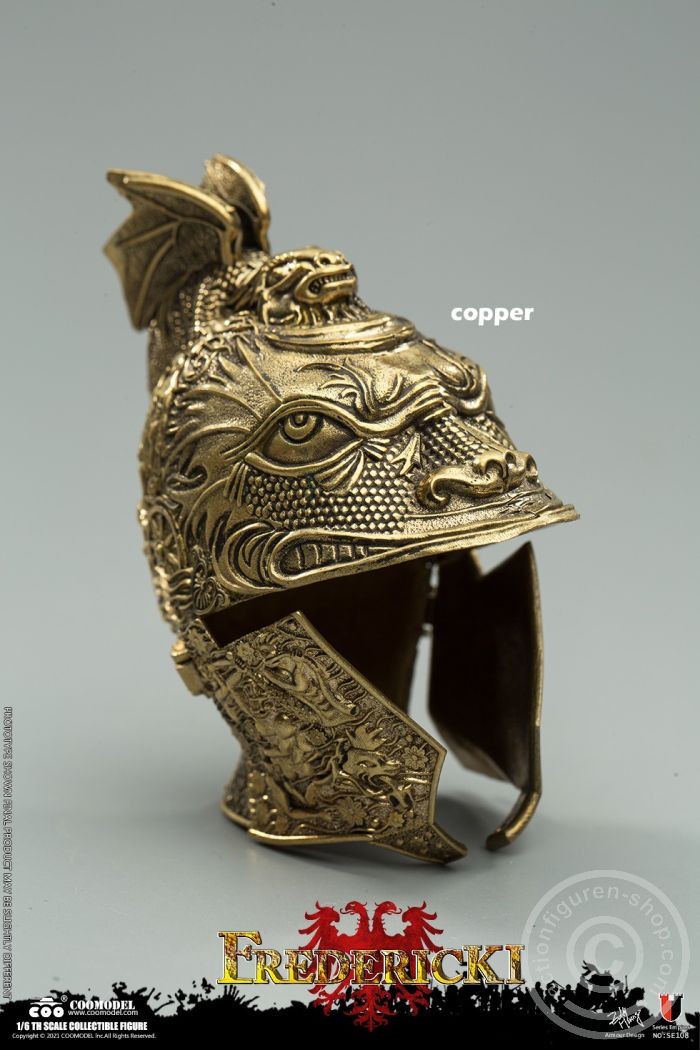 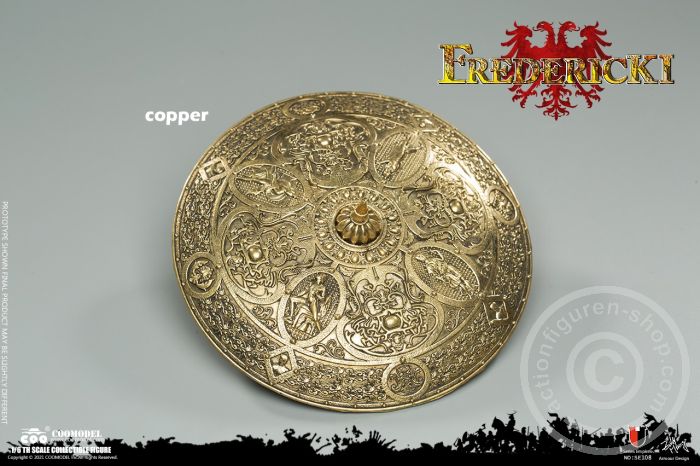 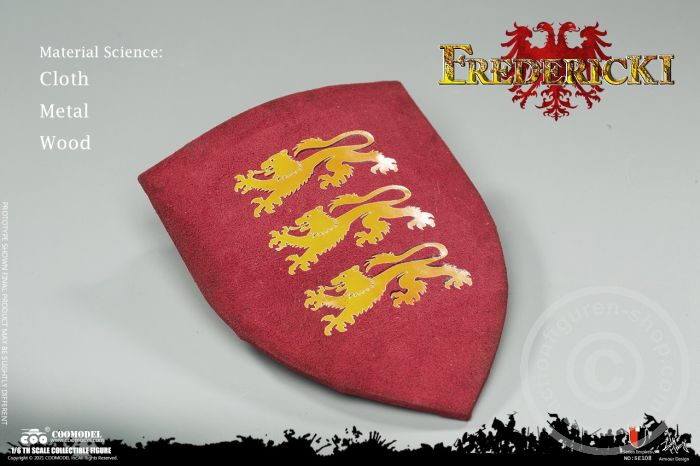 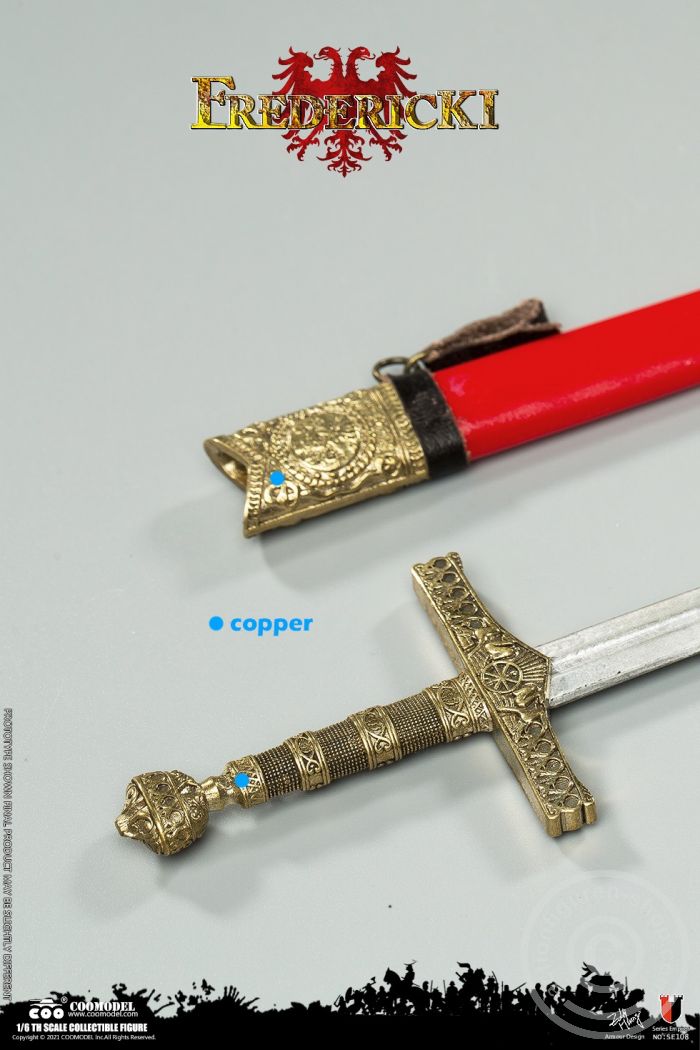 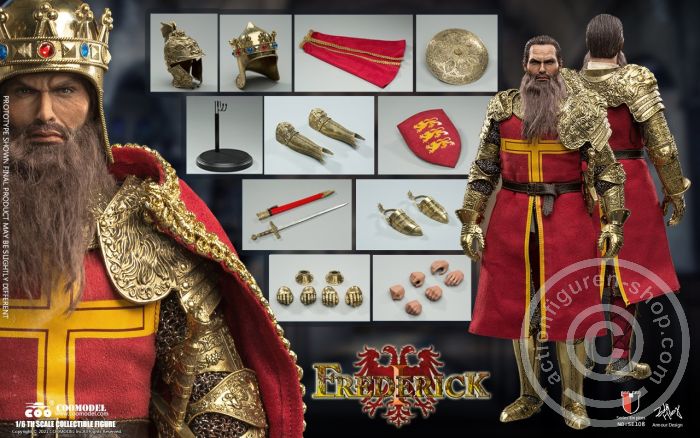 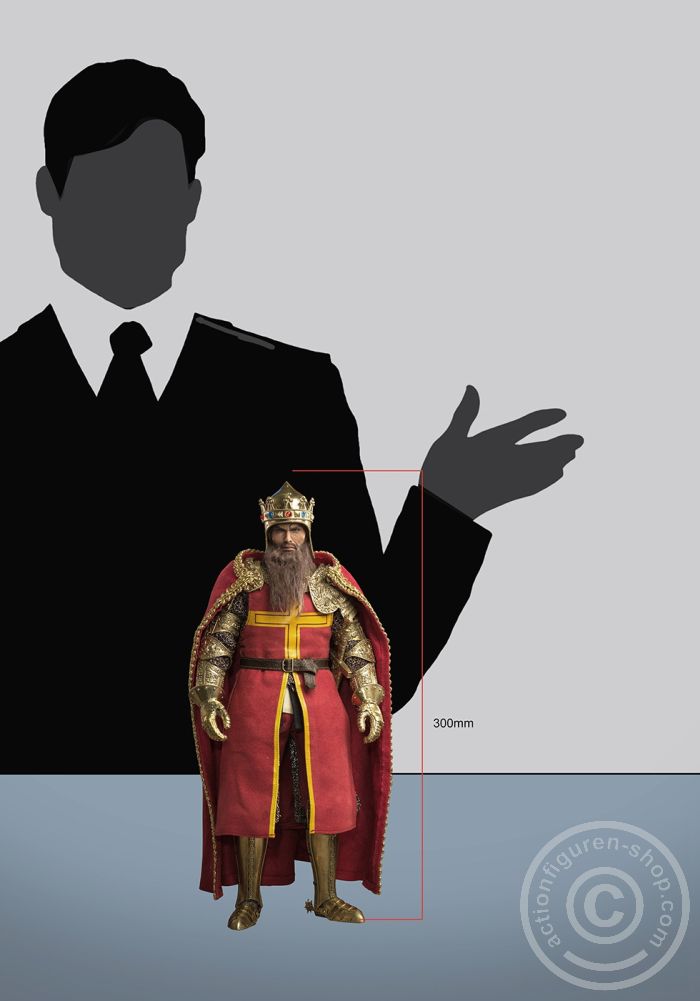 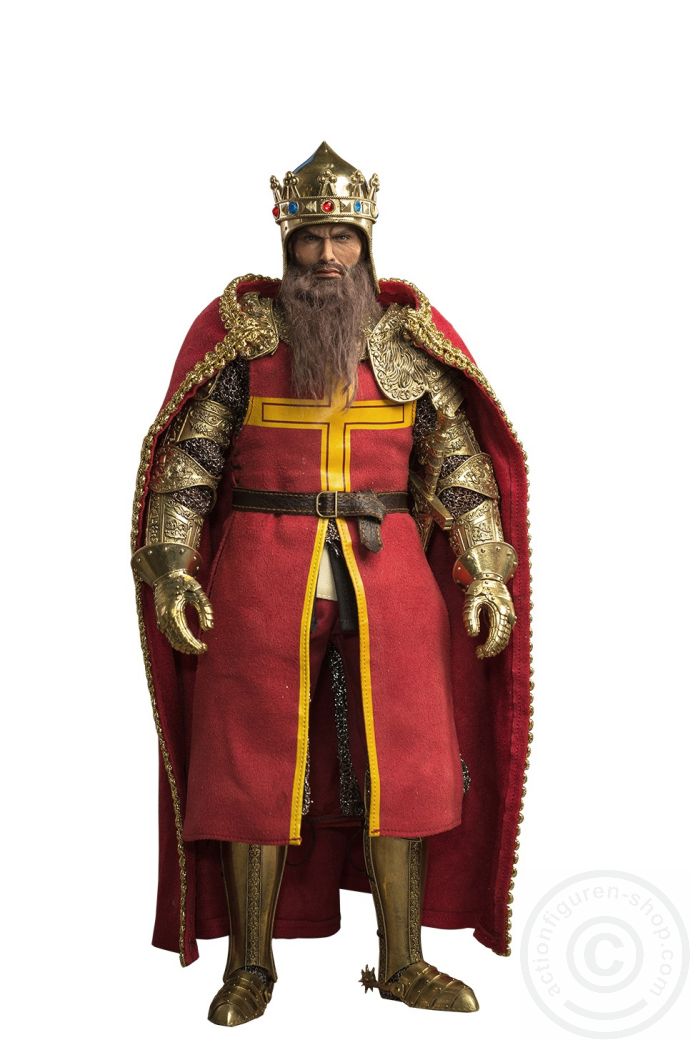