Star Trek: The Next Generation, rebooted Star Trek for a new generation and one of its most enduring contributions was Patrick Stewart as Captain Jean-Luc Picard.  Although strict and formal at first, Picard was quickly embraced by the fans and Stewart’s portrayal has become the gold standard for captains in the franchise. The character led the series through seven television seasons and four movies and has returned for his own new series, twenty years later.  No other Star Trek captain has had more on-screen adventures than Jean-Luc Picard.

In the Feature film First Contact Picard must face his most fearsome foe, the one that has damaged him to his core – the Borg Collective. With no less than the fate of all humanity at risk he must overcome his fear, shame, and thirst for revenge to save the entire galaxy from becoming Borg.

This fine collectible figure is a perfect rendition of everyone’s favorite Starfleet captain and a great addition to your EXO-6 Star Trek™ 1:6-scale figure collection.

This 1:6-scale figure re-creates this iconic character in exquisite 1:6 detail. Standing approximately 12 inches tall, every element, from his 24th century tunic to his custom black boots, is authentically reproduced. The original portrait sculpt of Patrick Stewart has an authentic, hand-painted likeness.

• Realistic Portraits: Picard’s stern expression shows his resolve in taking on the Borg no matter what the cost.  Lovingly rendered by a top artist, this excellent likeness of Patrick Stewart as Captain Picard is specially hand-painted.

• Starfleet Duty Uniform: Meticulously researched, this duty uniform matches the pattern and color of the original costume recreated in 1:6 scale. Including the captain’s jacket, captain’s vest, and duty trousers – all exactingly matched to the original costume. Magnets are sewn into the pants so the holsters for the tricorder and phaser can be attached. An authentically scaled communicator badge is permanently affixed to the jacket and the vest. (Vest and jacket cannot be worn at the same time).

• Boots: Soft plastic boots sculpted to match the cut and style of the original movie footwear.

Captain Picard is outfitted with everything needed for a Star Fleet officer. He comes equipped with:

• Type II hand phaser.  The phaser can be worn in a black holster that magnetically attaches to his pants.

• TR-590 Tricorder X: This standard tricorder can be opened or worn in a holster.

• Phaser rifle: Type 3B Phaser rifle used by the Enterprise crew to battle the invading Borg. 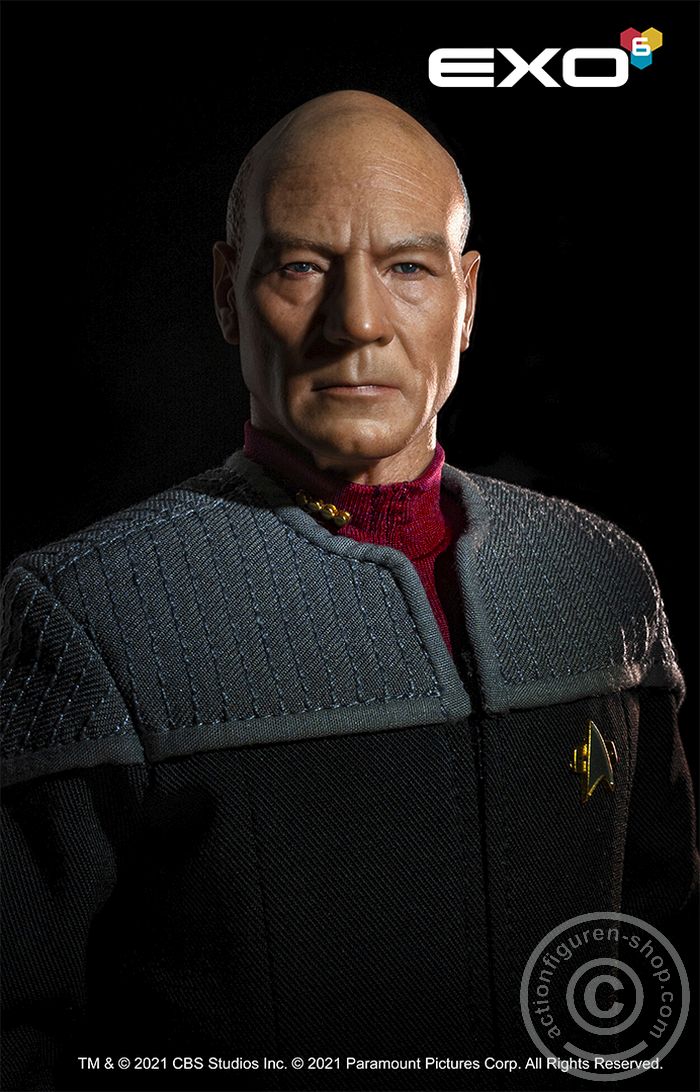 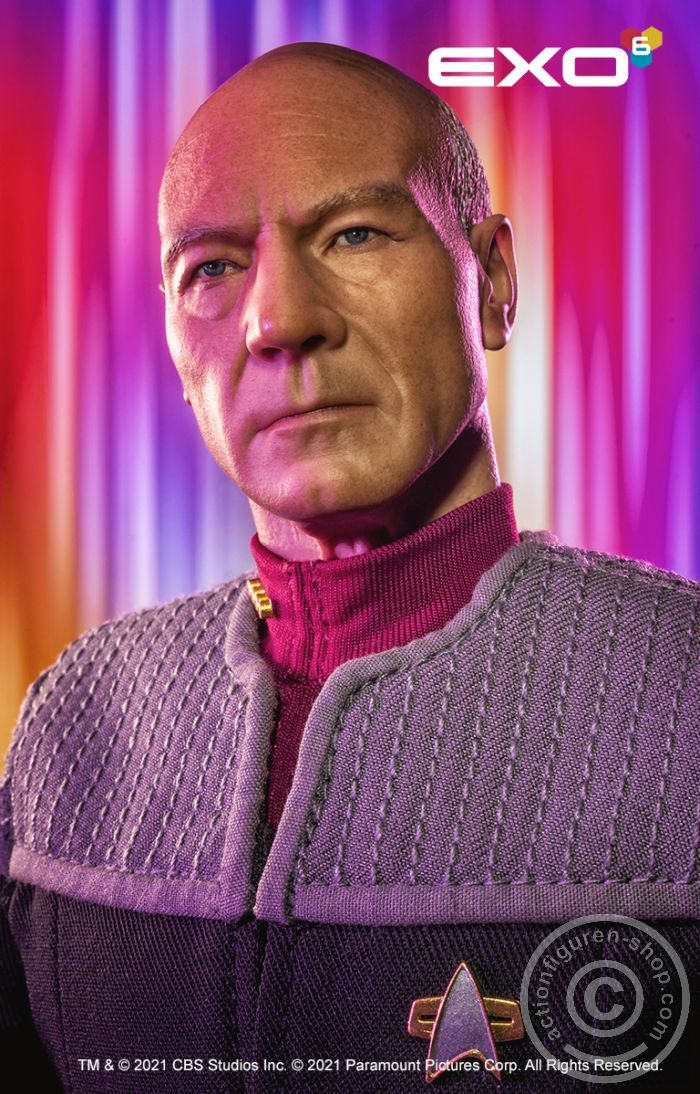 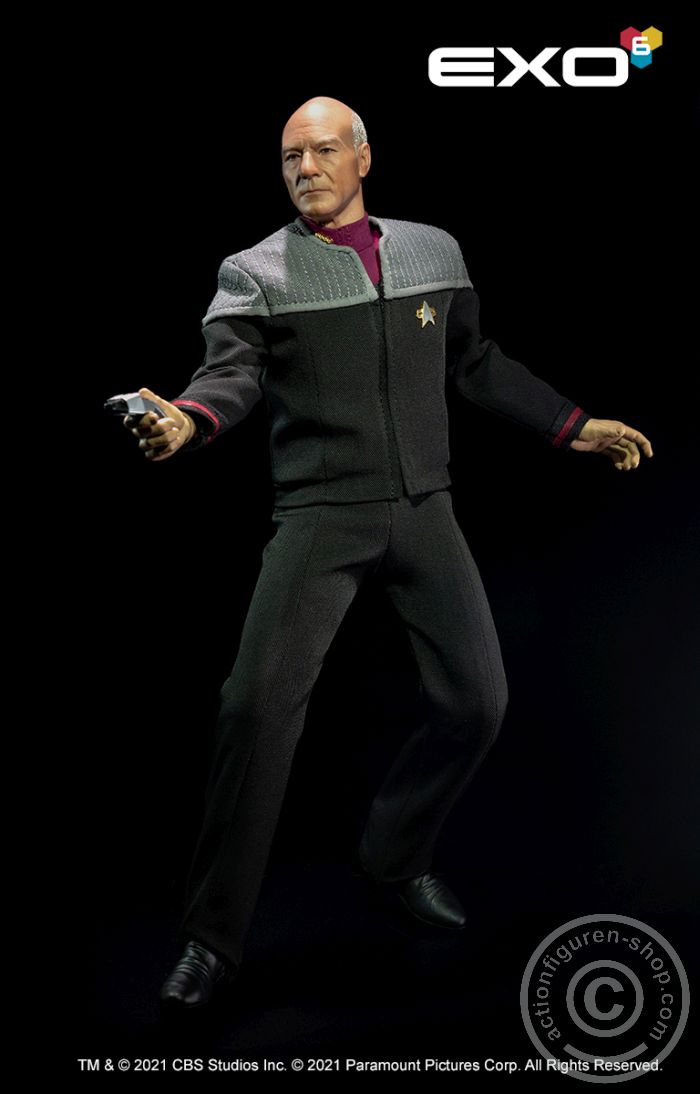 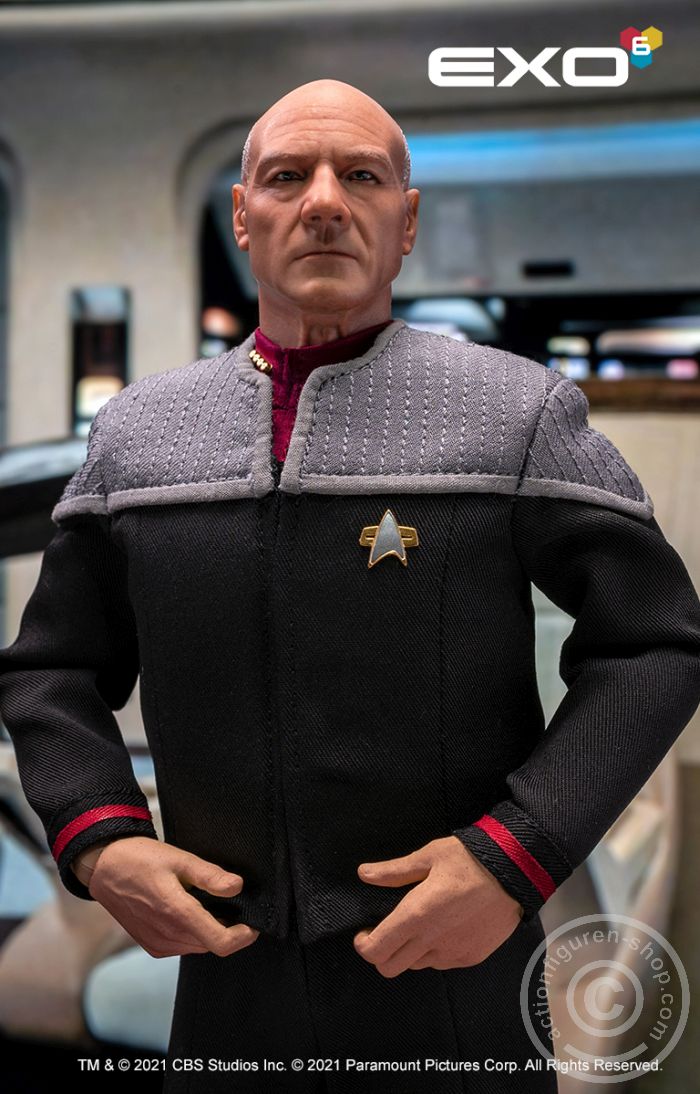 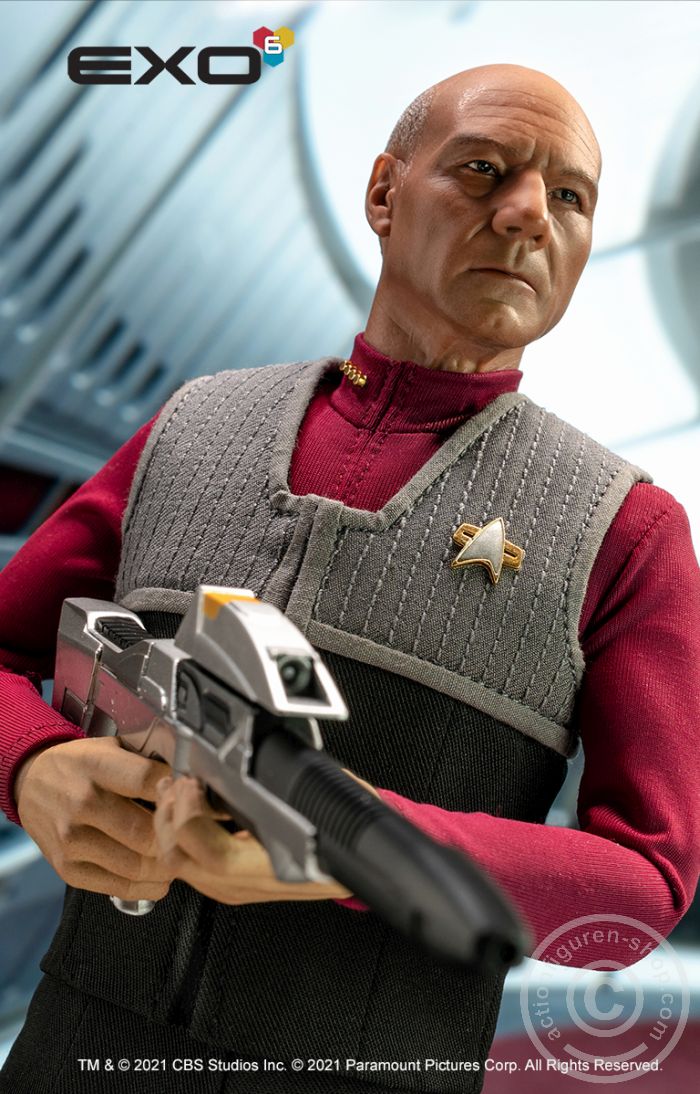 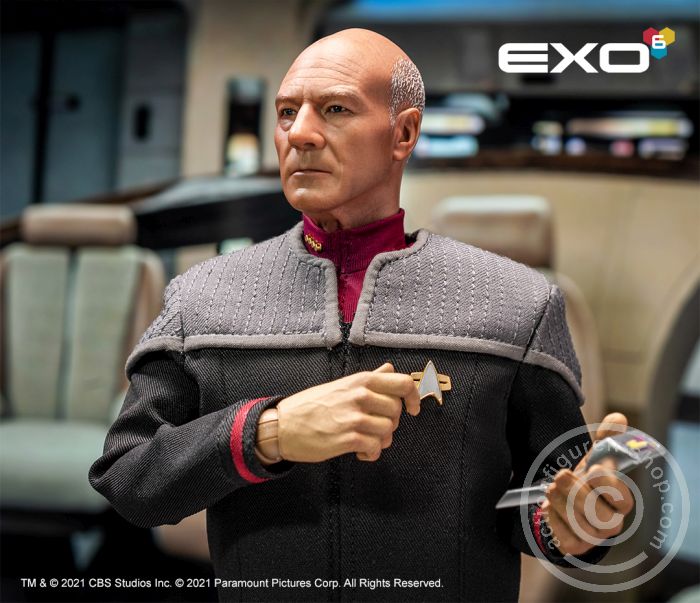 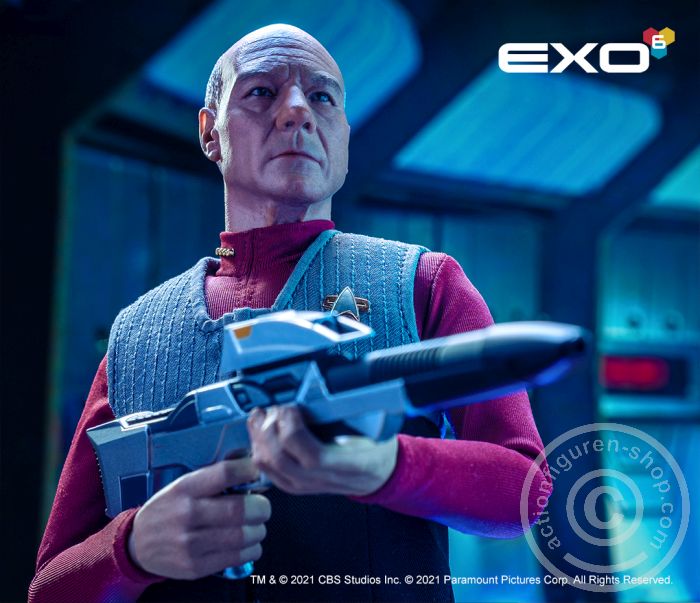 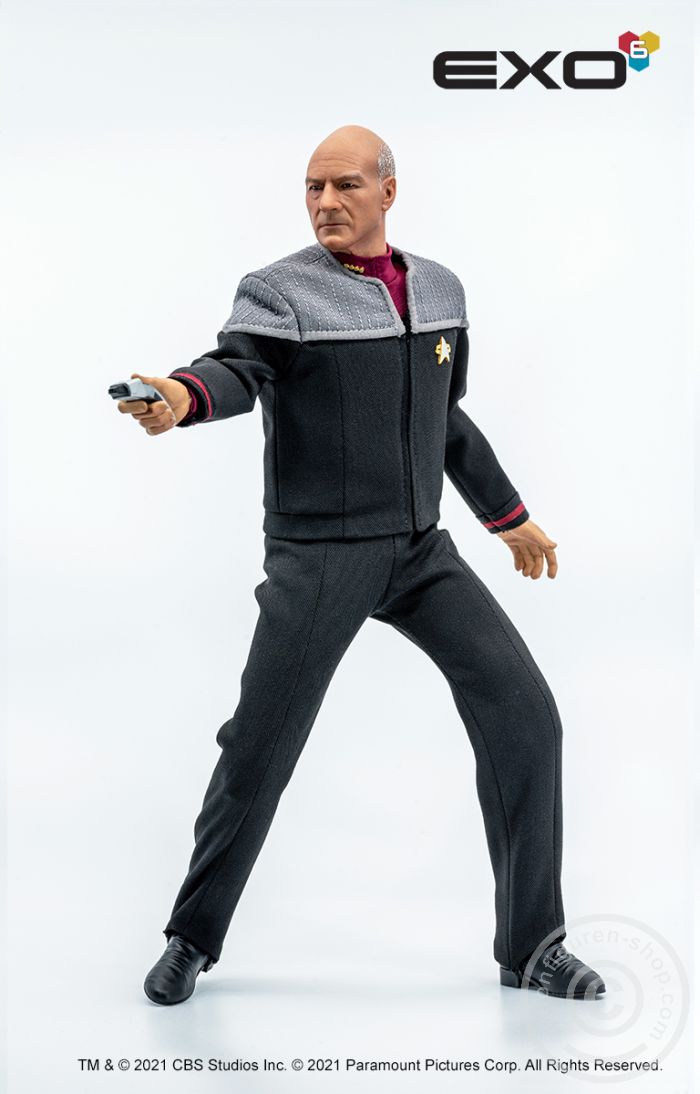 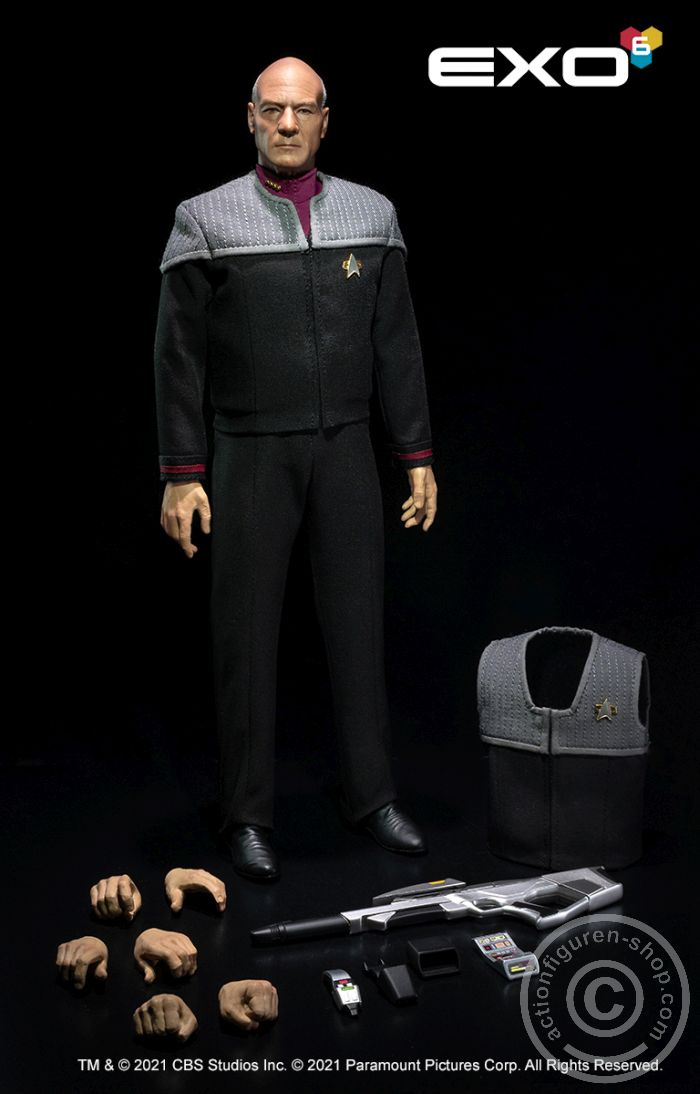 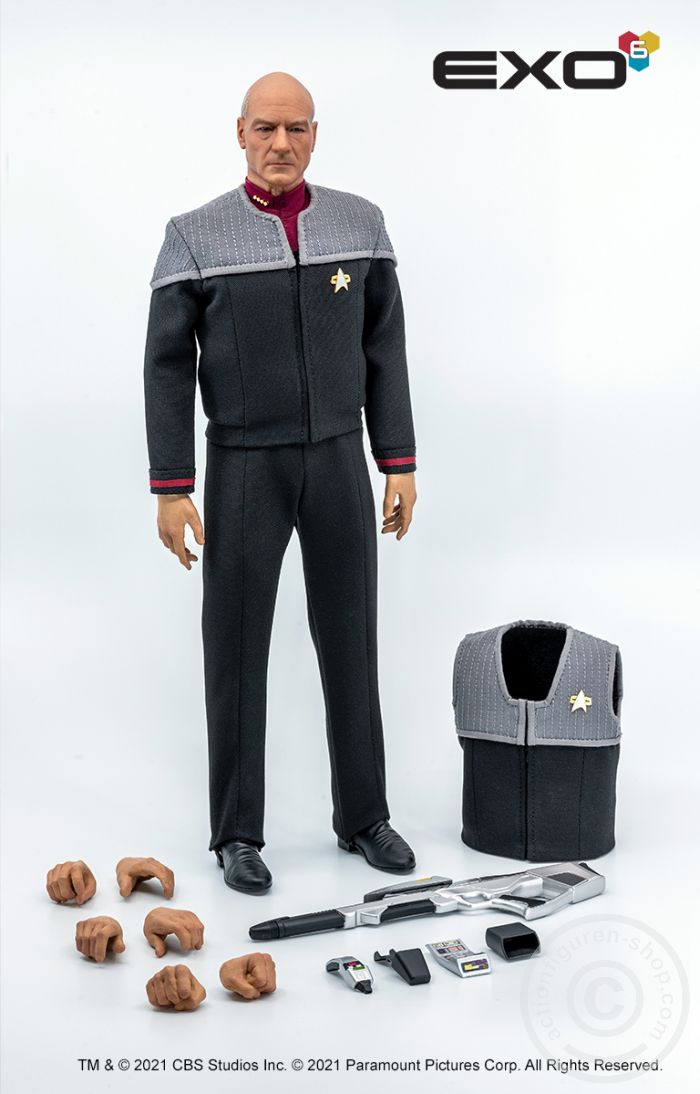